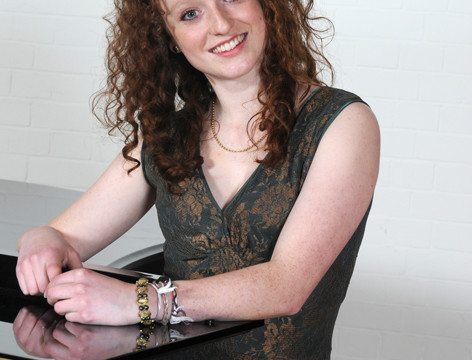 This evening young French Horn player Sarah Johnson, accompanied by Alex Jenkins (piano), will perform items from her wide repertoire including works Rachmaninoff, Poulenc, Saint-Saëns and Gilbert Vinter; she will also talk about the horn and demonstrate the instrument. Sarah is currently completing a Masters in Performance degree at the Royal College of Music. She is an experienced orchestral player and soloist and, at age 17, was the Maidstone and Mid-Kent Young Musician of the Year.

Biographies
SARAH JOHNSON
Sarah is currently studying for a Masters of Performance degree at the Royal College of Music, where she is an RCM Scholar supported by a Michael Quinn Award. She graduated in June 2015 with a degree in Music from St. Hilda’s College, University of Oxford, where she was also a music scholar. As a soloist Sarah has performed Mozart’s Horn Concerto No. 3 with the Buxted Symphony Orchestra, and Britten’s Serenade for Tenor, Horn and Strings with Oxford University String Ensemble. She was a finalist of the Oxford Philomusica’s Youth Concerto Competition in 2013, playing Richard Strauss’s Horn Concerto no. 1 in the Sheldonian Theatre. She took part in the LSO Brass Academy in 2016, is currently a member of the Britten Pears Orchestra and holds the horn chair for the National Youth Jazz Orchestra. Sarah started playing the horn at the age of 10, alongside violin and piano, and won the Maidstone and Mid-Kent Young Musician of the Year at the age of 17. Sarah’s ambition is to become a professional orchestral player.
ALEX JENKINS
Alex graduated in music at the University of Nottingham (BA in 2010 and MA in 2011) and during this time was guest soloist at the Nottingham Theatre Royal Pre-concert Series as well as giving numerous solo recitals at the Djanogly Recital Hall. He was then appointed as Musician-in-Residence at Christ’s Hospital School in West Sussex for two years, where he now works as a piano teacher. Alex is currently studying for a Master of Performance in piano accompaniment at the Royal College of Music (RCM) under the tutelage of Simon Lepper, Andrew Zolinsky and Roger Vignoles. He has accompanied at masterclasses given by distinguished performers including Roderick Williams, Graham Johnson, Toby Spence and Sir Thomas Allen and currently works extensively as an accompanist for auditions, examinations, recitals and competitions across the UK. Alex was awarded an accompanist’s prize at the Brooks-van der Pump English Song Competition and he and his duo partner were recently awarded first prize at the RCM Lieder competition. Alex has also been the accompanist for Maesteg Children’s Choir, Maesteg Male Voice Choir and for Nottingham University’s female voice choir Coro Sorelle,.