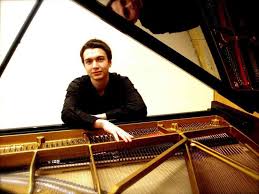 Erdem Misirlioglu is 27 years old and was piano section winner and concerto finalist of the prestigious BBC Young Musician of the Year contest in 2008. His recital will consist of music by Chopin (Balladse No.1), Debussy and Schumann. He will commence his recital with Schubert’s lyrical and serene Piano Sonata in G major D894.

Biography
Erdem was born in Ipswich in 1989 and started having keyboard lessons at the age of six. From the age of thirteen he attended a Saturday conservatoire and studied for five years under pianist Mark Fielding at the Junior department of GSMD (Guildhall School of Music and Drama). It was during these years that Erdem’s interest in music intensified and at the age of sixteen he realised he wanted to become a professional musician. Later he won a full scholarship to study with international concert pianist Martin Roscoe at GSMD.
In 2006 he was a prize-winner at the International Rachmaninov Competition for Young Pianists and in the same year won the Keyboard Instrument Prize at GSMD. In the 2008 BBC Young Musician of the Year competition, he was piano section winner and concerto finalist playing Rachmaninov’s Rhapsody on a theme of Paganini with the BBC National Orchestra of Wales.
Erdem has performed at many events in the UK and abroad and has appeared at prestigious venues such as the Wigmore Hall, Snape Maltings, the Cardiff Millenium Centre and St Martin-in-the-Fields. His Wigmore Hall recital was broadcast on Radio 3.
He gained much by performing in master-classes given by famous pianists such as Ronan O’Hara, Bernard Roberts, Peter Donohoe and Lang Lang; Lang Lang remarking that Erdem’s playing was “quite stunning”.
Erdem is not only active as concert pianist and recitalist but is also a keen chamber musician regularly playing in a piano trio and with the Arnold Camerata, an ensemble of string and wind players from GSMD and the Royal Academy of Music, with whom he has performed works including the Schubert Trout Quintet and Poulenc’s Wind Sextet.