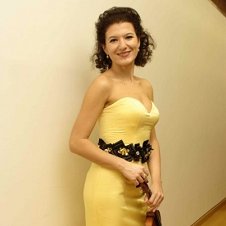 Tonight’s recital – Alda Dizdari’s first appearance for Redbridge Music Society – is entitled ‘In the Footsteps of Bach’ and will include performances of J S Bach’s D minor and E major Partitas for solo violin and also Bartok’s solo violin sonata. She will be selling signed copies of her CDs at the event. This will be a particularly informative and enjoyable evening.

Biography
Alda was born into a family of musicians and left her native Albania from an early age to pursue her career in music. She studied in Romania with distinguished soloists and received her Bachelor’s Degree from the University of Bucharest. This was followed by post-graduate studies at the University of Illinois in USA and at the London Guildhall School of Music and Drama where for two years she held the prestigious Leverhulme String Fellowship. In 2006 she received her first nomination for “The Best Classical Musician of the Year” in Albania and rose to fame internationally in 2008 after performing the Sibelius Violin Concerto with the Albanian Radio -Television Symphony Orchestra at Canterbury Cathedral in the presence of the Albanian Deputy Prime Minister.

Her triumphant debuts at London’s Wigmore Hall and the Southbank’s Purcell Room led to important appearances on BBC Radio 3, solo performances in Europe and the USA and the release of three highly acclaimed CDs, one of which was recorded live from the Wigmore Hall. In 2008 she was appointed Musician in Residence of The Wapping Arts Trust. She has embarked on an extended tour of concerts and projects exploring the relationship between music and art called the Rhythmic Ties Concert Series. These projects have taken her around much of England, Holland, France, Spain, USA and Australia collaborating with major visual artists and musicians. Alda is a devoted chamber musician and she has been guest leader of the Allegri String Quartet and leader of the Ensemble de la Chapelle St Mark, Luxembourg. She founded the Chromatico Contemporary Ensemble and has toured Europe with Ensemble Modern and Pierre Boulez. She was selected by the Gramophone Magazine as a “One to Watch” musician in the May 2011 issue and also received plaudits in The Strad magazine in July 2012. Alda plays a G.B.Ceruti Violin, made in Cremona in 1791, bought specially for her by a private sponsor and uses a Dominique Peccatte Bow which is on loan to her from the Stradivari Trust.